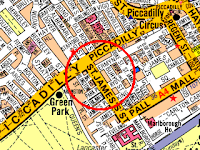 I’m a bit pushed for blogging time tonight – and no, I’m not watching Hell’s Kitchen - so in an eco-friendly spirit of literary recycling this is a piece by me from this week’s New Statesman:

When I was a student, there was an organisation called the Straight Line Society, which I never quite got round to joining. Its members would draw a straight line on an A-Z and then follow that path as accurately as they could, even if it meant negotiating their way through private houses and gardens. Later I realised that this society, whether it knew it or not, was practising the art of psychogeography.

As first defined in 1955 by Guy Debord, co-founder of the French situationist movement, psychogeography reinvented aimless walking as a revolutionary act. The situationists would cut up maps of Paris, reassemble the fragments and then walk the amended routes, in search of a new awareness of the city not driven by the repetitive routines of work and the daily commute.

Psychogeography has now gone online, with groups of enthusiasts writing about their adventures. The Manchester Zedders stick a pin in an A-Z, head off to explore that map square, and then blog about it. The Loiterers’ Resistance Movement, a Mancunian artists’ collective, uses the blogosphere to rendezvous and share experiences, such as accounts of a “Subverting Surveillance Night” and an attempt to “dematerialise” the new Beetham Tower. Their commonest tactic is the situationist dérive, or purposeless drift through the city. Once a month they ramble around unregenerated parts of Manchester. On one occasion they ended up in an underground car park where they held an impromptu concert with kazoos and tambourines.

The same spirit is evident in Remapping High Wycombe, a project run by Cathy and John Rogers, a brother-and-sister team of “psycho-crypto-topographers”. They wanted to make an imaginative record of the old town centre before it was redeveloped, so they created an algorithmic dérive in which they repeatedly followed the same set of simple instructions – for instance, “Take a left and then a right”. My favourite online psychogeographer is John Davies, a vicar who spent two months walking the length of the M62 motorway and blogging about it from the wifi areas in Travelodges and service stations.

Literary psychogeographers such as Iain Sinclair and Will Self reveal the city as an intricate maze of hidden histories and surreal connections. But these bloggers tend to be collaborative and tentative, more willing to explore mundanity for its own sake. For them, the city does not yield up its psychogeographic secrets readily; sometimes a bus shelter is just a bus shelter, not a site of ancient or occult significance.

Most of them did not initially recognise themselves as psychogeographers. The Loiterers’ Resistance Movement says it still cannot agree on a definition for the term, but that its members do “like plants growing out of the side of buildings, urban exploration, drinking tea and getting lost. Gentrification, advertising and blandness make us sad. We believe there is magic in the Mancunian rain. Our city is wonderful and made for more than shopping.” You don’t have to be a situationist to say Amen to that.

Mundane quote for the day: ‘Art is dead. Let us create our daily lives.’ – Slogan scrawled on walls in Paris, May 1968
Posted by Joe Moran at 19:29