An offer you can't refuse 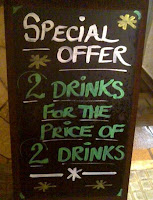 As a keen student of the vocabulary of the new managerialism, I’ve noticed that the word ‘offer,’ preceded by various adjectives, is becoming almost as ubiquitous among the suits as that better-known, ill-starred phrase, ‘going forward’. While eating a meal at a motorway service station recently I read a free booklet titled ‘Good Enough to Eat’ (not, on reflection, much of a recommendation) which boasted that ‘we have a team of what we call “foodies” (they live and breathe food) who are dedicated to the continual evolution of Welcome Break’s food offer’.

The meal was as appetising as you would expect something described as a ‘food offer’ to be.

I have also noticed that universities, in their mission statements, have started to talk about ‘our academic offer’ – not in the conventional sense of 2 B’s and a C to do history, but in the sense of the overall student experience packaged as a commodity.

Then on Radio 4’s PM programme I heard the man from Wirral council justifying a programme of library closures in the borough by arguing that we have to ‘use our remaining buildings more imaginatively … if we want to improve our cultural offer’. The argument seemed to be that reducing the number of library buildings was not necessarily worsening the library service – the all-inclusive ‘offer’.

The significance of the word ‘offer’ is surely not simply to do with its associations with consumerism. It suggests that goods and services can be trimmed down and corralled into a manageable whole. The natural partners of the ‘offer’ are the ‘one-stop shop’ and the ‘hub’ – more voguish words de nos jours. Any amount of centralisation and rationalisation can be justified in the name of that nebulous entity, the ‘offer’ eg ‘We’re sorry we’ve had to sack all our librarians, dump all the books on landfill sites and turn all the library buildings into tanning centres and massage parlours. But we feel this is the best strategy for improving our overall cultural offer going forward.’

Mundane quote for the day: ‘Is there anyone who has not once been stunned, emerging from the Métro into the open air, to step into brilliant sunlight? And yet the sun shone a few minutes earlier, when he went down, just as brightly. So quickly has he forgotten the weather of the upper world. And as quickly the world in its turn will forget him. For who can say more of his own existence than that it has passed through the lives of two or three others as gently and closely as the weather?’ – Walter Benjamin
Posted by Joe Moran at 21:43