The slow death of the phone box 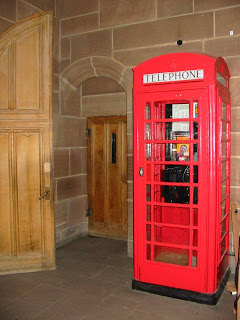 The K6 phone box that used to be at the top of our road – the type designed by Giles Gilbert Scott, who was also the architect of Liverpool’s Anglican Cathedral,* which I can see out of the window as I write – is no longer there. I’ve no idea when the men in coats took it away. If I, as a student of the everyday, didn’t notice it going, I don’t suppose it was mourned by anyone else. In the age of Twitter and the iPhone, our telephone boxes can’t be long for this world, and no one seems to be kicking up a fuss. It was different in the 1980s, when there was a big row about the last great cull of the K6s by the newly privatised British Telecom. It’s a story brilliantly told by Patrick Wright in a chapter of his 1991 book A Journey Through Ruins. This is what I wrote about the episode in an article I published a couple of years ago in a history journal:

“When the privatised British Telecom was formed in 1982, it greatly accelerated the phasing out of the classic K6 Jubilee Kiosk designed by Giles Gilbert Scott in the 1930s, which had been taking place slowly since the 1960s. BT claimed that the new glass and aluminium kiosks were less easily vandalised, offered better access for elderly and disabled people and presented a clean, corporate image. Perhaps the most significant aspect of the new kiosks, however, was that there were different types installed in different areas, with some models dispensing with doors and the most primitive having just a simple canopy. One of BT’s marketing directors said neutrally that it was offering ‘a range of complementary designs … to provide good payphone facilities in every conceivable environment’. For Patrick Wright, though, the new kiosks were

BT’s humble contribution to growing social polarisation … the better your area the more kiosk you could expect to find. Users in respectable neighbourhoods and well-policed thoroughfares would still be offered a roof, some walling, and a choice between cash and cardphone. The new underclass, meanwhile, would have to settle for a sawn-off metal stump with an armoured cardphone bolted into it.

Conservationists called for the K6s to be preserved as classics of industrial design and ‘symbols of our country’. For some right-wing critics, the disappearance of the red telephone box embodied an unresolvable tension between traditional conservatism and Thatcherism’s more aggressive neo-liberalism. Roger Scruton used the arrival of the new ‘barbarous concoctions of steel and aluminium’ to dismiss the whole ‘tyrannical pursuit of novelty’ since the Enlightenment. It did not matter what type of phone box there was in Birmingham ‘where modern architects have already done their work,’ he argued, but ‘it still matters on a village green, a hillside or a moor’.

Scruton’s unconcern for Birmingham, which was radically rebuilt in the 1960s, raised a familiar question about subtopia: the complaint was partly about ugly street furniture per se and partly about its insertion in ‘inappropriate’ places. In a sense, the burgeoning heritage industry of the 1980s ‘solved’ this problem. In response to their threatened removal, English Heritage, formed in 1983, named up to 1000 of the oldest kiosks as listed buildings. Referring to this ‘kiosk mania,’ John Delafons claims that ‘it must be doubted whether a more absurd undertaking has ever been known in the history of conservation’. After this campaign by English Heritage, BT agreed to retain some of the K6s as working payphones, but only if they were located in tourist areas, within existing listed buildings, or in ‘attractive’ (usually upper- or middle-class) neighbourhoods. Many of the decommissioned red kiosks were sold off at auction to be re-used as pub garden furniture or shower cabinets in private houses. For Wright, this emphasis on heritage aesthetics neglected a more significant issue about the decline of public, shared space in the Thatcher era. The K6’s disappearance also anticipated much broader changes in public amenities in the 1980s. As local authorities were forced by law to contract out their public services to private companies, street furniture diversified. Items such as bus shelters, litter bins and park benches increasingly became an adjunct of global outdoor advertising companies like Adshel and JCDecaux, which agreed to supply these items for free in return for using their surfaces as advertising space. Since bus shelters could not be nostalgically recuperated in the same way as the K6, these significant alterations to the everyday landscape rarely formed part of public discussion.”

Reading this again has just reminded me of one of my favourite bits from my favourite films – the last scene of Local Hero where the phone rings out in the red telephone box in the Scottish fishing village over Mark Knopfler’s lovely theme tune. I wonder if anyone has slapped a preservation order on that one. One of these days I’m going to drive up to Pennan in north-east Scotland, the model for Ferness village in the film (according to the AA Route Planner it is 409.2 miles and would only take me eight hours) and ring someone from that phone box.

*Presumably that is why there is (or was the last time I looked) a K6 in the Cathedral itself (see picture)
Posted by Joe Moran at 21:38