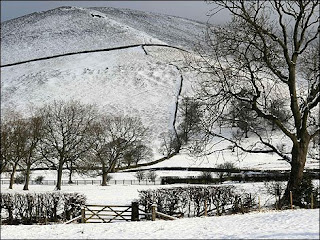 Out of my window I can see it’s snowing, although there’s not a hope of it sticking. In Liverpool, that happens about as often as it does in the Sahara. If you want to make me homesick, show me a picture of the Peak District in snow, like the one above. I was brought up in Glossop, about 1000 feet above sea level, and we were used to being snowed on and snowed in.

I think I am suffering from what Charlie English, in his new book The Snow Tourist, calls ‘nostalgie de la neige’. Among many elegant phrases, English writes that ‘the apparently unnecessary beauty of snow crystals has been put forward as evidence of a divinity’; and that ‘much of the perceived treachery of snow lies in the fact that it appears stable and even welcoming, but can collapse dramatically into a lethal torrent’; and that ‘snow is rarely, if ever, merely white. The angles and surfaces of snow crystals reflect and refract the different colours of sunlight that play upon them like the glass in a chandelier’.

In Patrick French’s recent biography of VS Naipaul I also found this lovely description of snow, in a letter the 18-year-old soon-to-be-author wrote back to his family from grim austerity London in 1950: ‘Last week I had my first snow. It came down in little white fluffs; you felt that a gigantic hand had punched a gigantic cotton wool sack open, letting down flurries of cotton shreds. If you went out your shoulders and your hair were sprinkled with the fluffs. The closest thing I have seen to it in Trinidad is the stuff that gathers in the refrigerator – not when it gets hard though.’

Of course, nostalgie de la neige isn’t what it used to be. ‘Ou sont les neiges d’antan?’ [‘Where are the snows of yesteryear?’] wrote the French poet Francois Villon in the 15th century. In the land of lost content, I imagine.

Mind you, even a small amount of snow still has the awesome power to mess around with our daily routines. While researching my book on roads, I read about the catastrophic gridlock of January 2003, when thousands of drivers were left stranded overnight in sub-zero temperatures in a 13-mile tailback on the M11. The catalyst was the freak weather conditions that never fail to bring Britain to a standstill (snow in January) compounded by a series of jack-knifed lorries, and motorists abandoning their vehicles or sleeping on the hard shoulder, blocking the rescue services and gritting machines. The crisis conditions produced a blitz spirit, more akin to a natural disaster. Lorry drivers shared their rations and the Women’s Royal Voluntary Service handed out hot drinks from mobile soup kitchens, while the residents of Duxford Village struggled through four-foot drifts on the motorway verge to bring food, drink and blankets to the motorists. After 12 hours the traffic started moving again and no one was harmed – unless you count the commuter stung with a £212 taxi fare.

Here are my five favourite stories about famous people, culled from a recent trawl through the online edition of the Oxford Dictionary of National Biography:

1. ‘After a variety of menial jobs [Benny Hill] became a milkman driving a horse-drawn cart round Southampton and fantasizing that he was Wyatt Earp, or some other Western legend. He later capitalized on this experience with the song “Ernie—the Fastest Milkman in the West”.’

2. Much of Les Dawson’s drag act was based on ‘mimo-ing’, the northern working-class art of ‘mouthing vocabulary relating to unmentionably delicate parts of the body or the act of reproduction’. He had the self-educated man’s love of language, eg ‘I was vouchsafed this missive from the gin-sodden lips of a pock-marked lascar in the arms of a frump in a Huddersfield bordello.’ He described his own face, more prosaically, as resembling ‘a bulldog sucking piss off a nettle’.

3. Spike Milligan ‘once attempted to cram pounds of spaghetti down a manager's throat in Harrods’ food hall in order to replicate the sufferings of geese in the manufacture of pâté de foie gras’.

4. Professor Stanley Unwin began to develop his nonsense language after he went for an interview for an engineering job at the BBC and, when asked about oscilloscopes, nervously blurted out: ‘Percentage modulakers on the output’. He also said that he was inspired by a phrase about a ‘troutling stream’ from James Joyce’s Finnegans Wake. He tested his new language out on his children, telling them fairy tales about ‘Goldyloppers and the Three Bearloaders’ and ‘the Pidey Pipeload of Hamling’. He became famous in a TV ad for Flowers Keg Bitter in which he uttered the immortal lines, ‘Cheeribold, lip-smaggery joyfold!’

5. Alec Guinness reached a younger audience late in life as the character of Obi-Wan Kenobi in Star Wars – a role which he was not proud of. Once he was approached for his autograph by a mother and her young son. After some negotiation Guinness agreed to sign on one condition: the boy was never to watch Star Wars again. Not entirely unpredictably, the boy burst into tears.
Posted by Joe Moran at 21:49