The power of the painted face

I did a piece on the painted portait for last week's Guardian:

Oliver Cromwell famously said that he wanted his portrait to include “all these roughnesses, pimples, warts and everything as you see me”. Nowadays we have little choice in the matter. We live in an era in which our photographic likenesses circulate ever more freely in the form of webcam images, profile pictures and mobile phone snapshots, and they cannot all be flattering.


You would think that, in this era of instantly available avatars of ourselves, something as analogue as a painted portrait would have little purchase. But all this week, viewers on The One Show are voting on which public figure should be the subject of a “People’s Portrait” in the National Portrait Gallery. And last week there was much interest in the artist Grahame Hurd-Wood, who aims to paint a portrait of every person in his home city of St Davids. He thinks it will take him at least another five years to reproduce all 1800 residents – a task that could be done with a camera in a day.


The painted portrait has outlived most of its original purposes. Before photography, it was the main way of preserving someone’s image beyond their own lifetime. It was also largely the preserve of the rich and well-connected, a way of announcing wealth, status and ancestral lineage. None of these advantages applies in the new age of the “selfie”, the self-portrait taken with front-facing phone camera.


But a painted portrait can still be extraordinarily compelling. For it can show us that we are not, as Shakespeare wrote and most of us think we are, the lords and owners of our faces. Before allowing ourselves to be photographed, we subconsciously flinch and arrange our features in such a way as to give a poor sense of how we usually look. The artist Graham Sutherland once said that “only those totally without physical vanity, educated in painting, or with exceptionally good manners, can disguise their feelings of shock or even revulsion when they are confronted for the first time with a reasonably truthful painted image of themselves”. Anyone who has been horrified at encountering their glum, ill-prepared countenance unexpectedly in a shop window will know what he means.


Just as a selfie is only one version of the self – for most people do not view us completely face-on, grinning inanely, at arm’s length – a painted portrait is a reinvention of another person. Many portrait painters make the head bigger than it really is, because it is what we notice first in others. The eyes may be enlarged for the same reason, while the ears, which most of us barely register unless they are especially protuberant, are usually an afterthought. A portrait painter is trying to capture a person’s ineffable essence rather than a mirror image. As Picasso said of his portrait of Gertrude Stein, “everybody says that she does not look like it, but that does not make any difference. She will.”


No one, after all, has just one face; it changes constantly according to such variables as angle of view, mood, lighting and the ageing process. Compared to those of other species, human faces are very different from each other, and, since we have more separate muscles in our faces than any other animal, uniquely expressive. And yet every human face, for all that it is as idiosyncratic as a fingerprint, also seems fundamentally familiar. In old paintings, it is always the face – rather than the historically distancing aspects of hairstyle, costume and decor - which conveys the sense that the person portrayed is someone recognisable who could step out of the painting into the present.


I still recall my shock at first seeing the face of Tollund Man, the mummified body discovered in a Danish peat bog in 1950 - a mild, unremarkable face you might just as easily have come across attached to a stranger on the bus. The selfie has become ubiquitous not because we live in an unusually narcissistic age, but because we first connect with other human beings through their faces. And that is also why a painted portrait has the power to move us still.
Posted by Joe Moran at 15:19 No comments:

You have been warned 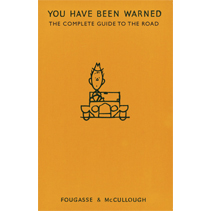 British Library Publishing sent me a copy of a book they have just republished. You Have Been Warned! A Complete Guide to Road was first published in 1935, co-authored by the British Punch cartoonist Fougasse (real name Kenneth Bird, now best known for those wartime ‘Careless talk costs lives’ posters) and Donald McCullough (later to become the avuncular chairman of the BBC’s Brains Trust). A runaway bestseller, it was a comic anthropology of the eccentric behaviour of road users. Fougasse’s cartoon of a driver stretching out his right arm, for instance, was translated as ‘I am going to turn to my right,’ ‘I am going to shake the ash off my cigarette,’ and ‘the house over there with the green door is where our cook’s mother lives’. A wonderfully vague hand signal was translated as ‘‘I am going to TURN to the LEFT or the RIGHT or SLOW down or SKID or STOP or maybe DASH across and ask the WAY from the policeman on POINT duty.’


The book had a semi-official sanction, being published with funds from the National Safety First Association. Scarier safety propaganda was regarded as rather shouty and unEnglish, the kind of in-your-face activity with which the Nazis, who pioneered the national road safety campaign, were associated. Propaganda that focused on the potential for accidents, advised one psychologist, would ‘only produce a dangerous fear in the nervous and timid and would be no deterrent to the exhibitionist’. You Have Been Warned called the new Highway Code ‘the Road-User’s Statute of Liberty and Magna Carta of the Road’.


For a book published nearly 80 years ago, the humour stands up very well – as well, I would say, as another humour classic from the 1930s: Sellar and Yeatman’s 1066 and All That.
Posted by Joe Moran at 10:37 No comments: