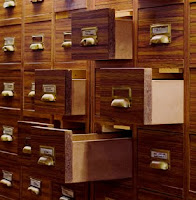 I’ve been down in London looking at archives: leafing through old copies of the TV Times and the Orkney Herald in the soon-to-be-defunct British Newspaper Library at Colindale; scrolling through the Radio Times on microfilm in Humanities 2 at the British library at St Pancras; looking at government files about the mounting of television masts in the National Archives at Kew. It’s a living.

In her book, Dust, the historian Carolyn Steedman uses a term borrowed from Jacques Derrida to describe the sensation that scholars sometimes feel when visiting archives: ‘Archive Fever’. Since the nineteenth century, she writes, a visit to an archive has been regarded as ‘a foundational and paradigmatic activity of historians’. She quotes the French Romanticist Jules Michelet’s phrase about the ‘dust of the dead’ which he believed he inhaled while in the archive. Archives really are dirty and dusty as the elderly paper disintegrates – at Colindale you can see bits of old newspaper all over the floor by the reading desks. I hope the cleaners are appropriately remunerated. When reading Michelet for the first time, Steedman understood ‘history-writing in generic terms, as a form of magical realism, with the historian’s contribution not the mountains that move, the girls that fly, the rivers that run backwards, but the everyday and fantastic act of making the dead walk and talk … Then there is romance in another meaning, in an earlier sense, as in chivalric romance, as in the sense of the quest: endurance of all kinds of trial and tribulation, in pursuit of some goal or grail.’ Agreed: I mean the National Archives at Kew are such a long way away, almost right at the end of the District Line, for goodness sake.

Steedman is sceptical about this ‘cult of the archive’ because it suggests some material, graspable world which once existed but can be recaptured, when actually an archive contains only the most fragmentary record of what happened in the past. Archive Fever, Steedman writes, is a kind of desire: ‘the desire to recover moments of inception: to find and possess all sorts of beginnings’. The archive inspires ‘a Freudian romance, of finding all the lost things and names, whatever they may be: things gone astray, mislaid, forgotten, wasted.’ In fact, she argues, ‘nothing starts in the Archive, nothing, ever at all, though things certainly end up there. You find nothing in the Archive but stories caught half way through: the middle of things; discontinuities.’

And yet … the lovely, efficient way the files arrive by magic in your own little locker half an hour after you have ordered them by computer. The gentle sound of thousands of fingers tapping on laptop keyboards. The race against time to get through one last file before they kick you out at the absurdly early hour of 4.45. I have suffered from my own mild form of archive fever. And then I look at my notes and realise that most of the stuff I’m interested in – ‘the stupid little tragedies of those clipped and limited lives’ (H.G. Wells) – doesn’t end up in archives. And the fever vanishes as quickly as it arrived.

Mundane quote for the day: ‘Tonight, the long-awaited leaders’ debate. The bland leading the bland. After about 30 minutes I found myself losing consciousness and went upstairs to watch a BBC2 documentary about the men who scratch a living on the huge garbage dump in Lagos. Uplifting, moving, humbling. Not a trace of self-pity. Their dignity, wit, optimism, sense of solidarity and community causing them to soar above their awful circumstances, putting to shame those of us leading what, to the scavengers of Lagos, must be lives of unimaginable comfort, wallowing in our tabloid-induced misery.’ - Chris Mullin, Thursday 15 April 2010, Decline & Fall: Diaries 2005-2010.

The queue at the bank

A scene from modern British life. I am in the queue at the bank on Saturday, waiting to pay in a cheque. The queue is long, because there are only a few cashiers and this is now the only branch within a radius of several miles that is open. An elderly man, I would guess in his 80s, pulling a shopping trolley on wheels behind him, goes up to the cashier. He has received a new credit card in the post and wants to know what to do with the old one. Should he bring it in to the bank? No, he should just cut it up and throw it away. He is confused and worried that not knowing which card to use will mean that he will not be able to pay off his credit card bill, which he has also brought with him. A long, unproductive conversation ensues, conducted at high volume because he is deaf and cannot hear the cashier, but he remains polite throughout. The woman cashier keeps telling him to ring up the number on his bill, but he says he can't use the phone because he is deaf.

This man, who came to adulthood before most people had bank accounts, probably has no need of a credit card – he could just as easily manage with a debit card and a cheque book – but he has presumably been sold it as an easy way of managing his everyday financial transactions. And it has brought him only anxiety that he will be left in debt.

Credit cards, cashpoints and the internet have almost removed the necessity for high street banks to deal with their customers in person. Queueless services mean that they can focus on valued clientele and retreat from any obligation to the wider community. Online accounts allow them to cream-skim their wealthiest clients and offer them preferential rates. As smaller bank branches close, queuing up to be served by a cashier is now an old-fashioned way of getting hold of money – although I notice that there is also an alternative queue in the bank for ‘premier customers’.

The sad thing is that everyone within earshot, including the people in the queue, is laughing quietly at this elderly man. Why is he talking so loudly? How can he have got through life without understanding the basics of how banking works? The cashier is still laughing when I arrive at her till to pay in my cheque. She explains that the money will be in my account by next Friday. For six days, in other words, my money will cease to exist, except perhaps in the form of virtual chips on the international money markets.

I share the old man’s incomprehension at this way of ordering things.

A piece I did on birdwatching a while back is now on that excellent website, Caught by the River: http://caughtbytheriver.net/2011/08/off-piste-the-birdman-of-academia/


Mundane quote for the day: ‘How many people turn on the radio and leave the room, satisfied with the distant and sufficient noise? Is this absurd? Not in the least. What is essential is not that one particular person speak and another hear, but that, with no one in particular speaking and no one in particular listening, there should nonetheless be speech, and a kind of undefined promise to communicate, guaranteed by the incessant coming and going of solitary words.’ – Maurice Blanchot

Writing at the terminal

You may have read that the novelist Tony Parsons is currently employed as writer-in-residence at Heathrow Airport, following the successful residency of Alain de Botton a couple of years ago. There is a piece in today’s Guardian suggesting that this scheme for installing writers in everyday spaces could be rolled out nationally, starting with J.K. Rowling in the endangered Preston Bus Station (http://t.co/rNzKCUW). I’ve always been fascinated by the idea of people remaining sedentary in places of transit, and my book On Roads included several of these characters, including the couple who lived for 22 years, on and off, in a Travelodge overlooking the A1. John Wain foresaw all of this in his unjustly neglected novel The Smaller Sky, which is about a middle-aged scientist, Arthur Geary, who decides to live his whole life underneath the glass canopy of Paddington Station, where he finds solace and ‘perfect anonymity’.

In his recent documentary series, All Watched Over By Machines of Loving Grace, Adam Curtis tells the story of Bill Hamilton, a brilliant but eccentric evolutionary biologist who thought that all human behaviour could be explained genetically. As Curtis explained it, Hamilton would sit for hours on the platforms of Waterloo Station, looking at the commuters, trying to figure out the secrets of human behaviour as an entomologist might examine the movements of ants. I think Curtis meant to suggest this was how deranged Hamilton had become, a judgment which, as a student of the everyday, I naturally flinched at. Whether or not people behave like ants, I am sure you could discover a lot from spending time in a commuter station and watching closely the patterns of lovers kissing and parting, and people dashing for the train or anxiously peering at the annunciator boards or just looking for the toilets.

According to Hamilton’s entry in the Oxford Dictionary of National Biography, the truth may be more prosaic. Hamilton was not looking for the secrets of life but for somewhere to work. He ‘found it difficult to interest his fellow biologists in his work, and to get it published. He had failed to interest any potential PhD supervisors in the basic problem. They seem to have feared that it had something to do with eugenics. He did the work alone—in libraries, in his bed-sitting room, even on the platform of Waterloo railway station. He had no desk in a university department.’

Hamilton later wrote of his time at University College London: ‘I never had a desk there nor was ever invited to give any presentation to explain my work or my occasional presence to others. Most of the time I was extremely lonely. Sometimes I came to dislike my bed-sitting room so much that I would go to Waterloo Station, where I continued reading or trying to write out a [mathematical] model sitting on the benches among waiting passengers in the main hall.’

I am a fan of Curtis, by my way, but my ‘leap in logic’ warning light usually comes on about halfway through his brilliant documentaries, which I think of as works of art rather than argument … which is why I like them.

Mundane quote for the day: ‘We rarely get to prepare ourselves in meadows or on graveled walks; we do it on short notice in places without windows, hospital corridors, rooms like this lounge with its cracked plastic sofa and Cinzano ashtrays, where the cafe curtains cover blank concrete. In rooms like this, with so little time, we prepare our gestures, get them by heart so we can do them when we're frightened in the face of doom.’ - Thomas Harris's The Silence of the Lambs*

*Thanks to Marc Hudson for sending me this quote. His own rather excellent blog is worth a good look at http://dwighttowers.wordpress.com
Posted by Joe Moran at 12:50 1 comment: